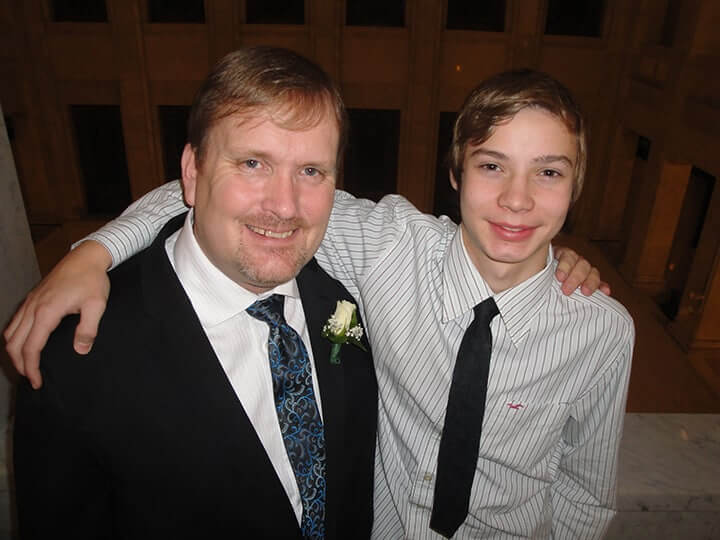 Countless conversations between Karl and his Little Brother, Eli, have begun this way. It’s a legacy of Eli’s shyness in the early days of their match. “Every time I picked him up, it would take Eli a little while to warm up to me again,” Karl remembers. They would drive around quietly until, eventually, 10-year-old Eli would pipe up from the backseat, with whatever was on his mind that day – usually Legos or Pokemon. “And then he would talk endlessly!” Karl laughs.

Six years later, Eli still loves to talk to his Big Brother, but their conversations have evolved to reflect Eli’s expanded interests as a sixteen-year-old. Today, Karl and Eli talk about guitar and marriage equality and Eli’s big plans for when he goes away to college, and everything in between.

Eli admits that the idea of a Big Brother made him nervous, until he got to know Karl. Getting a Big Brother was his mom’s idea. “I would never have expected to get this much support from someone other than my mom,” says Eli. “And over the years we’ve gotten closer and closer.”

Both Karl and Eli are very creative people, which is part of what makes them a great match. They bake an elaborate cake for Eli’s birthday every year (which is also the day before their match anniversary) – 13 layers for Eli’s 13th birthday, or a cake sprinkled with gold dust for his golden birthday this September. They’ve visited the farm where Karl grew up, made videos together, and spent hours talking about music.

Karl, who became a Big because he was looking for a unique volunteer experience, says this has been exactly what he hoped for, and more. “I don’t think of it as volunteering anymore,” he says. “Eli’s just part of my life now.” In fact, Eli is such an important part of Karl’s life that he was best man when Karl married his husband, Reynaldo, last summer.

And the fun’s not over. Eli and Karl agree that the years ahead of them will be full of even more rambling conversations, adventures, and growth.

“It’s a fantastic experience to see Eli come into his own identity, and I’m looking forward to whatever comes next,” says Karl.