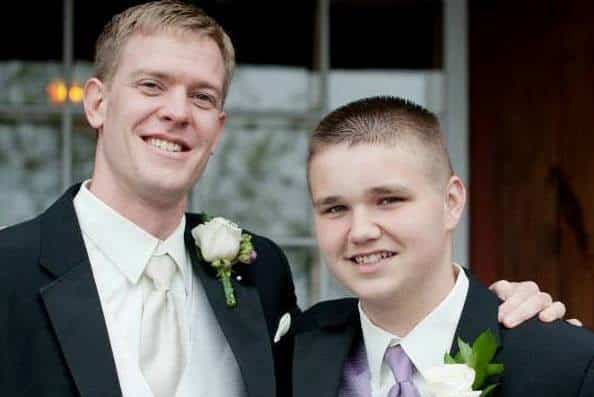 “Just show up.” According to Jordan, that’s the secret to being a good Big Brother or Big Sister. And he should know; Jordan and his Little Brother, Tyler, have been matched for over eight years.

It may sound simple, but for Tyler, having a Big who shows up when he says he will has meant a lot. Tyler’s dad has been in and out of the picture, so Tyler really values Jordan’s stable influence. “I can talk to Jordan about anything, and I know he will listen to me, no matter what,” Tyler says.

Jordan and Tyler are as close as any brothers – so close that Jordan asked his Little to be a groomsman in his wedding. Nearly a year later, they are both still talking about what a special experience that was. For Tyler, it was an honor to stand up as one of the most important people in his Big’s life, and Jordan was proud to introduce his Little Brother to all his friends and family.

Tyler is 16 now, and Jordan says it’s been an honor to see him grow up. He beams with pride when talking about his Little Brother’s grades – straight As – and his engaging, outgoing personality. “Tyler’s really got it going on. And I know he’s got a great future ahead of him,” he says.

Seeing Jordan and Tyler pal around, it’s easy to imagine them staying friends long enough for Jordan to be a groomsman in Tyler’s wedding someday, too.