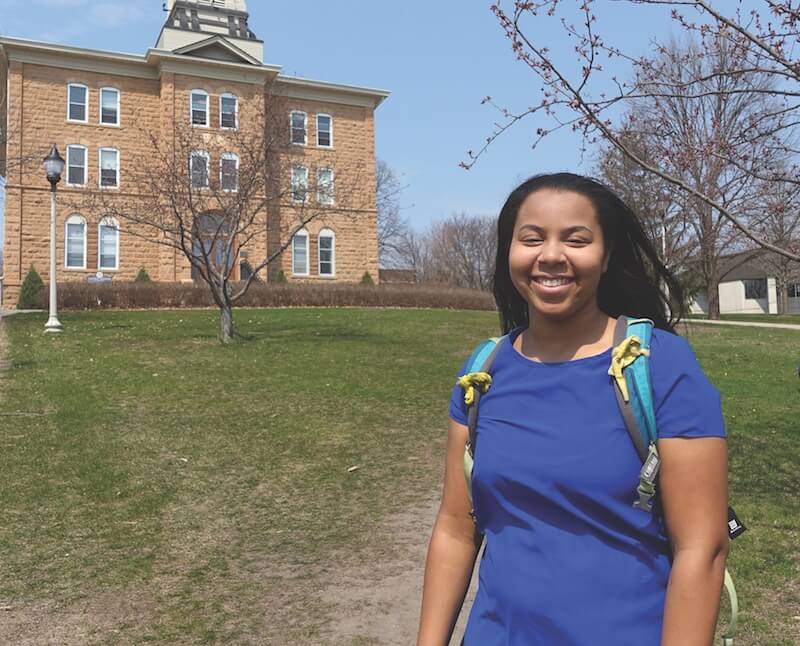 Haley’s mother was careful not to let on that they were living paycheck to paycheck, but Haley and her two brothers could sense how financially burdened she was. Her rough Minneapolis neighborhood didn’t help.

Her family moved to Bloomington. At first, life seemed different. But she soon realized that this suburban area also had neighborhoods rife with drugs and poverty. Ultimately, relocating didn’t help much. “We could change our zip code, but not our income bracket,” said Haley.

School provided an escape. “At school I was a different person,” said Haley. “I dove into books, extra-curricular activities, and sports. But while she was zooming ahead at school, she was struggling at home: “My two worlds clashed.”

“When I was ten, my mother made a selfless decision. She admitted that she needed help raising me and allowed a stranger to enter the picture, someone who could be there when she could not,” said Haley. “Thanks to my mother’s love, I was enrolled in the Big Brothers Big Sisters program, and I gained a lifelong sister, mentor and friend: Deirdre.”

“During the last eleven years, I have learned so much from Deirdre,” said Haley. Deirdre emphasized that education is key, and that hard work is, well, hard…but it always pays off. Deirdre spotted Haley’s potential for leadership, and insisted upon strong core values: Integrity. Character. Respect.

“I knew tragedy and failure. I knew that statistically I was a student who wouldn’t make it past high school,” said Haley. But Deirdre encouraged Haley to take control, and be more than a statistic: “I learned that we all struggle but the future is not determined by the bumps in the road, but rather by the how we choose to swerve around these obstacles.”

With her Big Sister’s guidance, Haley tapped into myriad resources on her journey toward higher education: ACT prep classes, financial aid seminars and college readiness resources. After high school graduation, Haley won a scholarship to Gustavus Adolphus College.  As Haley puts it, “Thanks to Deirdre’s help, I’m now on track to graduate college with great experiences, a high GPA and zero debt.”

And someday Haley hopes to “be a Big Sister to someone like me…giving back like I was supported and mentored.”