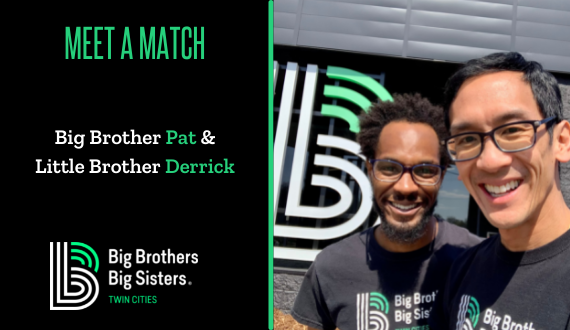 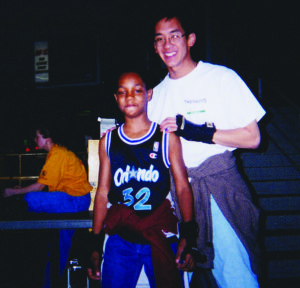 Derrick Pam’s mom wanted him to have a positive male role model, so she signed him up for Big Brothers Big Sisters’ youth mentoring program. Mom and son had no idea how this action would change Derrick’s life. His soon-to-be Big Brother, Pat Sukhum, had no idea his life was about to change too.

Although Derrick was shy and quiet, he was excited about the prospect of having a new friend. He and Pat were matched in the summer of 1998.
Fast forward to today. Derrick and Pat’s involvement with Big Brothers Big Sisters has evolved and strengthened over the 23 years they’ve been matched.

After being a Big Brother for many years, Pat joined the BBBS Board of Directors, where he served for 10 years. This summer, Pat was selected as CEO. Derrick is now living on his own and working full-time. Despite their changing roles and busy lives, Pat and Derrick continue to make time for each other. We asked them to share more about their relationship.

Q: Derrick, how did you feel when Pat was named CEO of BBBS?
A: “I was pretty excited. He told me he was considering the position one day after work. My jaw just dropped! I told him it’s the perfect job. We ended up talking for quite a few hours on that topic. I told him, ‘yes, you should definitely go for it!’”

Q: What was your first impression of each other?
A: “My first impression was that Pat had a lot of good vibes about where he was in life,” reflects Derrick. “I thought to myself, ‘This is someone I can look up to.’” “To not mince any words,” says Pat, “we came from different worlds. What Derrick has taught me about perspective, adapting, compassion, life, and love are lessons I would never have learned anywhere else.”

Q: Clearly you have a very special relationship. Have there been any challenges?
A: “Some of the best moments in my life have been because of Derrick,” says Pat. “We’ve also had rough moments. Tears, yelling, quarrels, like true brothers. Some days we’re reading each other’s minds. Other days, we’re miles apart. But through it all, I’ve had no better friend, no person more loyal, than Derrick. He may be on a better path because of me. I’m definitely a better person because of him.”

Q: Derrick, do you think you’ll become a Big Brother someday?
A: “It’s definitely a possibility. Every child needs a parent or role model to look up to. It’s important to be there, to show up, just like Pat has always done for me.”