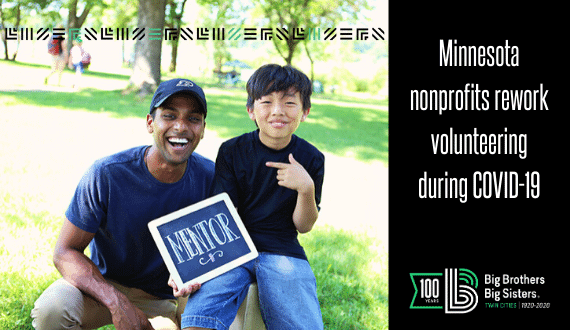 Angie Stanislowski was inspired to volunteer during the COVID-19 crisis, but nonprofits near her Andover home had scaled back volunteer activities or canceled them altogether.

Stanislowski had never heard of East Side Neighborhood Services, but at a friend’s suggestion, she started driving to Minneapolis each week to volunteer, packing boxes with food each week for residents in need.

“I was just moved by this need to not sit on your couch and binge watch [TV],” said Stanislowski, 46, a piano teacher and worship director. “There are people putting their lives on the line every day. It’s a small thing; I can’t do nothing.”

Nonprofits across Minnesota, which has among the highest rates for volunteering in the country, are scaling back events to adhere to physical distancing rules, shifting to activities done at home or online, or canceling volunteer programs. Yet, some nonprofits report a surge in the number of Minnesotans who want to help — many, like Stanislowski, volunteering for the first time.

“I think there’s been a resurgence in volunteers stepping up,” said Tracy Nielsen, who heads Minneapolis-based HandsOn Twin Cities, which connects volunteers to organizations and has seen a 140% increase in the number of volunteer opportunities since the pandemic began. “Nonprofits are thinking about how to completely reinvent what they do.”

Metro Meals on Wheels started a volunteer waiting list for the first time after thousands of people applied to deliver meals to doorsteps of seniors and people with disabilities.

“We haven’t seen anything like this before,” said Pat Rowan, executive director of the association of 32 Meals on Wheels programs. “We’ve had people really step up during this pandemic.”

At East Side Neighborhood Services, the Minneapolis nonprofit halted food shelves that pop up at low-income high-rises in Hennepin County and instead, volunteers put together 300 boxes a day of grocery items delivered to residents. Volunteers have their temperatures checked, wear gloves and masks and stay 6 feet apart.

Kristine Martin leads the nonprofit and was flooded with calls at the start of the pandemic. Now, she’s seeing more first-time volunteers, but she said overall numbers have dipped.

Some people fear being exposed to the coronavirus or are less interested in helping when activities aren’t one-on-one with people in need, Martin said.

Second Harvest Heartland, the Twin Cities food bank, depends on hundreds of volunteers to sort and pack food for area food shelves. Now, the nonprofit is restricting volunteering to 10 adults at a time.

That has resulted in a nearly 70% drop in the number of volunteers in March and April compared with last year — at a time when there’s a growing need for food assistance.

But for the first time, Second Harvest now has volunteer waiting lists due to smaller events and increased interest.

“We’ve had such an overwhelming response,” said Julie Greene, who oversees volunteer services at Second Harvest.

To fill the gaps, staff have redeployed to help with work done by volunteers and the food bank is buying pre-packed food boxes.

Scaling back volunteer events doesn’t work for every organization, though. Twin Cities Habitat for Humanity taps about 15,000 volunteers a year to build homes or to staff donation centers.

It has canceled volunteering since Gov. Tim Walz issued his stay-home orders in March. Instead, some of the nonprofit’s 150 staff members have helped and the nonprofit is paying subcontractors, hoping to keep building or rehabbing about 40 homes this year.

“The need is so great; I don’t think there’s ever been a time when homeownership is more important,” said Chris Coleman, the CEO and former St. Paul mayor.

He said the organization plans to resume volunteer events this summer with safety protocols. “We live in the land of volunteerism,” he added.

Some nonprofits are also seeing an influx in new donors during the pandemic.

But as with donations, Nielsen questions whether the uptick in volunteering will continue, especially when workplaces end remote work.

Some nonprofits don’t plan to resume in-person events at all in 2020, she said. About half of the posts on HandsOn’s site are online or remote events.

In August, some 4,000 volunteers would have helped fill backpacks with school supplies for kids in need as part of the Greater Twin Cities United Way’s largest annual volunteer event.

Now, the organization is planning an activity volunteers can do at home. Spokesman Trent Blain said United Way is optimistic that it will get the same turnout as in-person events given the high interest in its database matching volunteers with opportunities.

“The need is still going to be there,” Blain said.

Mentoring has moved online or to the phone for some groups. Big Brothers Big Sisters Twin Cities’ 2,000 volunteers are mentoring virtually while the organization tries new ways to draw more volunteers via social media and Google ads for nearly 500 children on its waiting list.

With in-person recruiting canceled, applications are running about half the number of last year.

“Every aspect of our organization is now virtual,” said Jennifer Severson, the nonprofit’s spokeswoman.

At General Mills, the Minnesota-based company started a program in April paying Minnesota employees to volunteer at local food-related charities.

Each Friday, Hannah Marmorine, 30, of Maple Grove, logs off work early to go pack bags of meals for students in need at the Sheridan Story in Roseville, a nonprofit she’d helped with before.

“I’ve found a lot of joy in volunteering during this time,” Marmorine said.

Josh Burke, 49, of Golden Valley, a General Mills lawyer, has stepped up his volunteering at Second Harvest. “It’s really important now [more] than ever,” he said.

At Allianz Life, the insurance company has promoted virtual volunteering, allowing Karah Piepkorn, 26, of North St. Paul, to do six fundraising walks in her neighborhood, snapping a photo as proof before her employer makes a donation to a nonprofit.

“I think it’s a lot easier for people to volunteer this way,” Piepkorn said. “It’s still an option to help out.”

Before the pandemic, Amiri Brotherson, 33, of Minneapolis, had already used up his two days of paid time off for volunteering that U.S. Bank allocates employees each year.

But he’s still giving back, doing mock interviews with students or donating to Habitat for Humanity.

“What’s not changed is the needs of our community,” Brotherson said. “How those needs will be served will look different.”