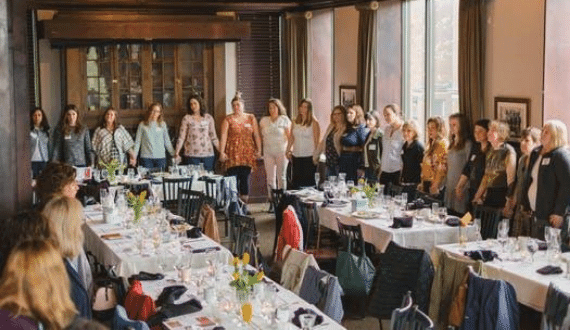 ABOVE: Mother’s Day can be particularly difficult for women who have lost their own. At last year’s brunch in St. Paul, women formed a circle and held hands in support and unity. This year, due to COVID-19, the gathering will be conducted remotely. Photo by Meagan Elizabeth Photography

Each year, on the Saturday before Mother’s Day, Christine Friberg hosts a brunch. It’s for a club whose members wish they’d never had a reason to join in the first place. All the same, they are so grateful to have found each other.

All are motherless daughters, connected through Friberg’s Twin Cities nonprofit, She Climbs Mountains.

The brunch is often informal — sometimes there’s a speaker, sometimes simply an opportunity to share a memory, poem or song.

But at the end, there’s a ritual. “We all stand together and hold hands,” said Friberg, who lives in Roseville. “We say our names, followed by ‘daughter of …’ and squeeze the hand of the next woman, to pass around the circle, honoring our moms.”

This year, the Twin Cities event will be virtual, and for many during these anxious pandemic times, even more needed.

Friberg said she was inspired by get-togethers first hosted decades ago by Hope Edelman, the Los Angeles-based author of the bestselling book “Motherless Daughters.” The book describes how losing a mother can impact a woman throughout her life, in so many ways.

Milestones such as giving birth or reaching the age at which their mom died all bring different challenges — but keeping a connection to a deceased mother instead of viewing grief as something to “get over” can help, as can finding a community of women who share this loss.

That’s the kind of community Friberg works to build.

“Before meeting these women, I felt so alone, and like the only one without a mother,” said Nicole Ford, who lives in Shoreview. “The loss of my mother left a hole in my heart. Knowing these women has made that hole a little smaller, and the pain and ache hurt a little bit less.”

Ford, who was 9 when her mom died from a brain tumor, had always felt like she was “holding on to her loss the wrong way,” because of the way grief would suddenly re-emerge during anniversaries or big events. That changed after she attended a She Climbs Mountains Mother’s Day brunch in 2017.

“From the moment I walked in the room, I felt surrounded in love, like the kind of love your mother gives you, from a group of women I did not know yet, all of whom knew and understood what it was like to be living without a mother,” she said.

“It was eye-opening and validating to me to know I wasn’t the only one feeling these things.”

That girl that I was

Friberg, who grew up in Chicago, was 15 when her mom, Loralee, died of ovarian cancer. But it wasn’t until she was 39 and a mom herself that she truly connected with another motherless daughter, sharing some of the books and articles about mother loss that she found helpful. Soon, that connection spooled into workshops at her local yoga studio.

In 2017, Friberg launched her nonprofit (she­climbs­mountains.org), which hosts events, meetups and workshops for adult women who have lost their moms. The organization also runs an initiative, called Girls Rise Up (sheclimbsmountains.org/girlsriseup/programming), for motherless girls ages 8 to 18.

While Friberg began by growing a community of adults, she aimed from the start to help girls who have lost a mom feel less alone.

She wants to give them what she wished she could have had as a teen. Back then, everyone assumed she was fine because she maintained good grades, but she felt like she never had a chance to grieve or talk about the way she felt.

“I feel so passionate about wanting to do something for girls. Because I want to love on that girl that I was, that didn’t get that,” said Friberg. “I think back to that girl and I’m like, ‘Oh my gosh, if she could have had someone, just to get some sort of connection with anyone who understood her.’  ”

Through a partnership with Big Brothers Big Sisters Twin Cities, the initiative pairs an adult mentor who is a motherless daughter with a girl who has experienced the loss of her mom. Girls Rise Up also hosts social gatherings and community-building programs — although they are virtual for now. As the coronavirus pandemic began to limit the kinds of programming and new connections that Friberg is hoping to build, she decided to send out care packages to the girls who are currently participating.

“I just feel hopeful that they know they’re not alone,” she said.

At one of the first Girls Rise Up in-person meetups earlier this year, Friberg found herself connecting with a 13-year-old and a 10-year-old who were talking about how, as their moms became sicker, their hospital beds were in their home.

“Talking about having hospital beds in their living rooms and dining rooms, I realized I’ve never talked to anyone about that, to another person that had that shared experience,” she said. “That was healing for me in that moment. Not as emotional as it was for them, but it was just good to say ‘You’re not alone. I had that too, and it was weird and it sucked.’ ”

Friberg is hopeful about the ways our society’s relationship with grief has changed since she was a girl.

“I think we are becoming more open. We are saying yes, it is something that’s lifelong, that’s ever-changing. We’re not getting over it. We’re moving with it,” she said. “And that is such a gift. We’re not going to do the same things that 30 years ago were done to me, right? We’re evolving in a good way.”

On a recent weeknight, 18 members of She Climbs Mountains joined in a Zoom call. Together in squares on their screens, they placed their hands on their hearts for a guided meditation before Twin Cities grief counselor Kelly Grosklags (conversations­withkelly.com), who was 11 when she lost her own mom to a heart attack, gave a talk about living in the moment.

“I’m so grateful that you all are here and that we’re sharing this time together,” Fri­berg said from her bedroom in Rose­ville.

As Friberg works to provide virtual support for what she calls “the most loving and accepting community of women I’ve ever known,” she is trying, as she does every year, to keep Mother’s Day in a positive light despite the heavy feelings surrounding it.

“There is an amazing power in mothers and we want that energy to be in our world. We can feel this pain of grief, but we can also be grateful for the moms that are still here and celebrate those of us who are moms,” she said.

“I really try to encourage people to grieve through a lens of gratitude. We’re pursuing healing, and also joy and gratitude.”

Erica Pearson covers features for the Star Tribune, with mini-beat on women’s issues. Before joining the Star Tribune, she spent more than a decade at the New York Daily News, where she was an assistant city desk editor.