Meet a Match: Troy and Luke 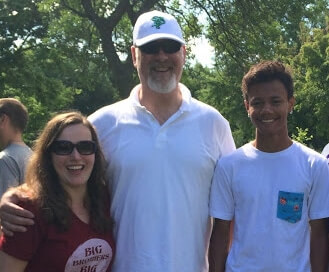 Every Big makes a difference in their Little’s life, some choose to make a difference in the lives of many Littles. Troy Allen has been involved with Big Brothers Big Sisters since 2009 when he was first matched with his Little Brother Luke. After being matched with Luke for seven years and “graduating” from the program (and high school!) together, Troy has decided to become a Big to another Little in need of a life-changing mentoring relationship.

How did you first get involved with Big Brothers Big Sisters?

A friend of mine was a Big Sister and several times during our relationship she had suggested that I should become a Big. I always seemed to have one excuse after another: I am too busy, what if we don’t get along, a year is a long time to commit to, I might be moving. Once I became a Big, I realized that I made all of these excuses because I was afraid the kid might not like me. I was proven wrong by my Little Brother, Luke. 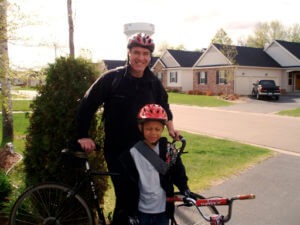 Troy: Luke was such a small kid and quiet, but had a great smile and gentleness about him. You could tell he was very loved by his family and they wanted him to have someone he could call his friend. I remember our first activity as if it were yesterday. Luke and I set off by bike to explore the Coon Rapids Dam and adjoining park area. His mom and grandma had packed a little lunch so we could keep our energy up. We rode and talked the entire time. The lunch was great and allowed me to remember what a juice box tasted like.    Troy and Luke’s first meeting 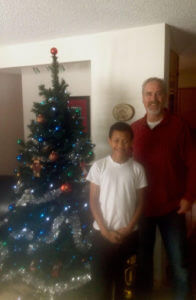 What did you learn from your Little Brother?

Troy: To think outside the box. The first year we were putting up the Christmas tree (our annual tradition after Thanksgiving), Luke asked me how to hang the the glass ball ornaments that had the hook attachment missing. I told him to put it back in the box and I would throw them away since you can’t buy replacement attachments. Being that I am tall and Luke was short, I was hanging ornaments on the top half of one side of the tree and he was doing the bottom half of the other side. I came around to his half to see how he was doing and found that he was still using the glass ball ornaments.

Since there were no hangers to attached the balls, he put the end of the pine needles into the opening on the ornament. To say the least, I learned two things: 1. Don’t doubt a child’s ingenuity and 2. Don’t throw away perfectly good Christmas ornaments. In fact, we took the attachments off of the good glass ball ornaments and put them on the tree in the Luke fashion. I still put these type of ornaments on my tree in the same fashion.

Why did you decide to sign up to be matched as a Big again this year?

Troy: I took two years off after our match graduation to reflect on my time with Luke. As a Big, I not only gained a lifetime friend, but I inherited a whole new family. Luke and I continue to be friends and see each other at least every other month. I see now that he is growing and moving on with his life. Now I know that it is okay to let him “go” and become a mentor to another Little.

Why should others consider becoming a Big?

Troy: Being a Big, if you let it, can be a fantastic experience. Let go of the time concerns you may have – it is only 2-4 times per month. Let go of any concerns of whether or not you will get along – kids are awesome and see the good in everyone. Don’t worry about what you are going to do – BBBS plans many activities to help you have fun with your little.

Taking the Next Step

We’ll make the right match.
Do you like tennis or chess? Cooking or photography? We’ll work hard to make sure you share common interests and live near one another, because making the right match between you and new Little Brother or Sister is so very important for a long-lasting connection.

A Little lives near you.
Little Brothers and Sisters match kids aged 8–12 who live in the Twin Cities. They come from Hennepin, Ramsey and Washington Counties, Southern Anoka County and Northern Dakota County.

Are you interested in becoming a Big? Learn more

Know someone who would make a great Big? Make a referral