GUEST BLOG: Big & Little Sister Represent BBBS on the Field at Half-time of Vikings’ “My Cause, My Cleats” Game 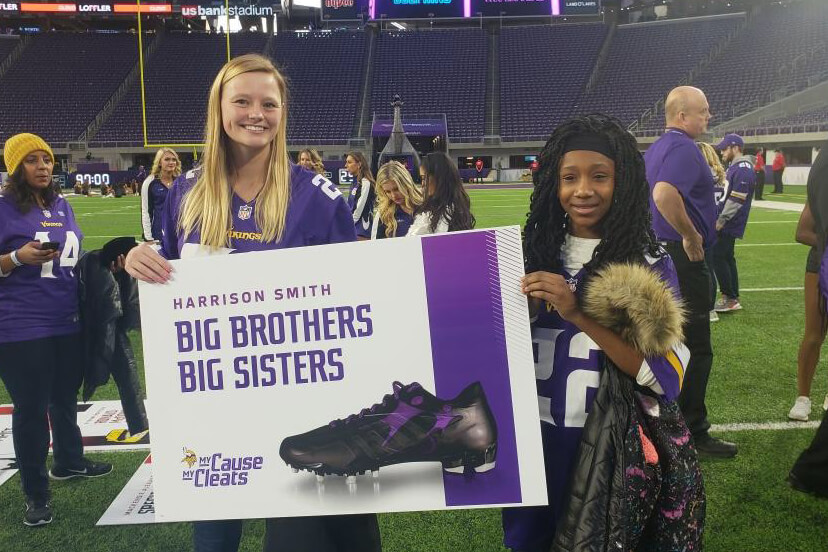 On Sunday, Dec. 16, 2018, my Little and I had the opportunity to attend a Minnesota Vikings game and go out on the field during the “My Cause My Cleats” half time celebration. What an amazing experience it was! Forty-eight Vikings players chose a charity they are involved with, and designed game-day cleats in support of their cause. Vikings All-Pro Safety Harrison Smith #22 and Safety Jayron Kearse #27 both chose Big Brothers Big Sisters Twin Cities as their cause, which allowed us the opportunity to represent BBBS out on the field during the game! 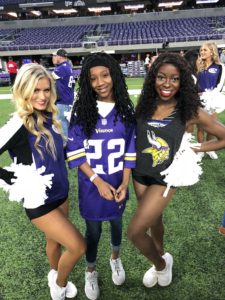 Little Sister Ana met Minnesota Vikings cheerleaders before the My Cause My Cleats game.

It was an early morning; I went to pick up my Little, Ana, at 7 a.m., and we headed down to U.S. Bank Stadium for rehearsal. We got to the stadium and they led us down to the field. The cheerleaders were practicing for their game-day performance and came over to say hello – an exciting moment for Ana, an aspiring gymnast! The Vikings support staff were all so kind and helpful, they gave us jerseys with “Big Bro Big Sis” on the back. We wore Harrison Smith’s number 22 and the other Big/Little pair (Quenton and Miles!) wore Jayron Kearse’s number 27. We practiced walking out onto the field holding a large poster with a huge picture of Harrison Smith’s Big Brother Big Sister-designed cleats (the coolest and sleekest of all the designs, in my unbiased opinion).

After the rehearsal, the staff took us to an area where they had breakfast waiting – an amazing spread of delicious doughnuts and muffins. After this, we were free to walk around before the game started. They gave us food vouchers, so we grabbed some food – can’t beat a cheeseburger and chicken tenders at 10:30 in the morning, right?! We then settled into our seats and watched the first quarter of the game – we saw THREE Vikings touchdowns, and Ana was in awe of the excitement in the stadium after each score! 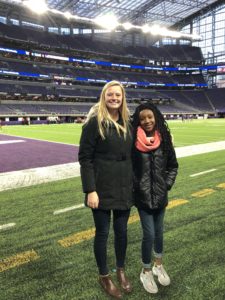 Ana and I on the field at U.S. Bank Stadium.

“My Cause My Cleats” Half-Time Debut

We headed down to the designated meeting spot after the first quarter and got ready for our half-time debut. Ana was a little nervous to walk out in front of that many people at first, but once we got out there, she loved it! It was unbelievable to be out on the field with a packed stadium surrounding you, and it was so neat to be able to do it in support and honor of Big Brothers Big Sisters Twin Cities.

Overall, it was such an amazing experience – one that both Ana and I will never forget. It was so neat to be able to learn more about the other non-profits that people and players are so passionate about, and I was proud to represent such an amazing organization. Thank you Harrison Smith and BBBS Twin Cities for giving us an unforgettable, once-in-a-lifetime opportunity!