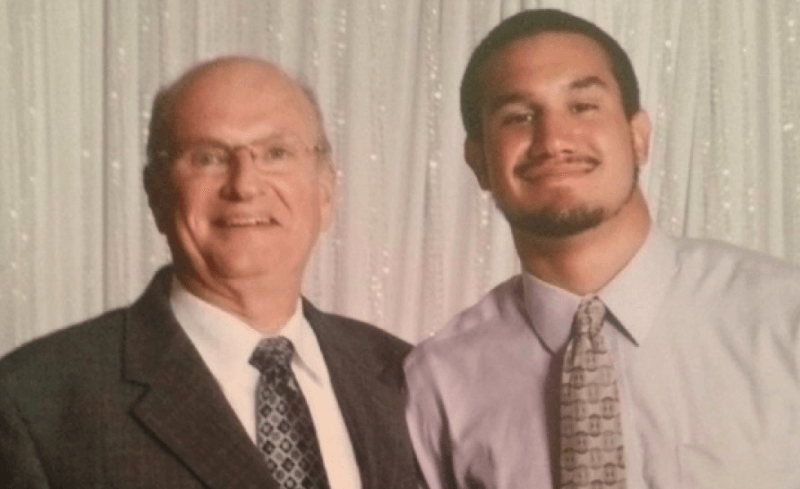 Adam’s mom made things happen. As a single parent with two young sons, she kept a roof over their heads and good meals on the table. “I was just a toddler when my parents divorced,” said Adam, so he doesn’t recall feeling loss or longing for his dad. But as Adam grew, so did his awareness. He noticed that police cars, drunken fights and run-down homes were a regular part of neighborhood life, and knew that his mom was struggling to make rent.

His mother had a message. “Despite, or maybe because of our circumstances, she always repeated the same thing,” said Adam. “She told us that when things get bad, just keep trying and working hard. Never give up.” These words meant as much to Adam as they did to his mother. “I’d think about them whenever I was waiting to catch a break.”

It was time to reach out. When Adam was ten years old, his mom signed up both of her sons with Big Brothers Big Sisters.  Adam’s brother was matched with a young, cool college  student. Adam’s Big Brother turned out to be a fifty-something father of three named Dave. “Imagine my disappointment,” said Adam. “I mean, what was I going to do with this old man?”

Adam was absolutely– and happily–wrong. “Dave turned out to be anything but old.” Together, the Big and Little tackled the Twin Cities, battling it out in mini-golf and croquet, hitting up sporting events, camping out and creating epic science fair projects. “I remember thinking that an old guy isn’t supposed to laugh with me like this!” said Adam. “We had so much fun together. We laughed like true friends.”

Darker days lay ahead. When Adam was in eighth grade, his mother was hospitalized for prescription painkiller addiction. “When we visited her, she said it again,” remembered Adam. “I want you and your brother to work hard, and never stop trying. I want to see you grow up and be successful.” A few months later, Adam got up for school like any other day. “But it wasn’t like any other day,” he said. “I was the first to come upon my mother, who had lost her battle to prescription drugs.” Even as he was overwhelmed by shock and sadness, her words—keep trying and work hard—played over and over in his mind.

Big Brother Dave, on business in Colorado, instantly boarded a plane home. Within hours, he tearfully walked up Adam’s driveway. “I just looked at him and he hugged me,” said Adam. “As sad as I was, the hug and the tone of his voice when he said everything’s going to be alright made me believe it. Dave would eventually help me make things okay.”

Dave stayed by Adam’s side through his graduation from Coon Rapids Senior High School. Dave drove Adam to his freshman dorm at North Dakota State University. “All the other kids had parents helping them set up their rooms, hanging around, not wanting to leave,” said Adam. “Dave took me aside and said, ‘I’m here for you, but you’re on your own now, and you will figure things out for yourself.’ I appreciated the way he handled the situation. He believed in me, he gave me the freedom to find my own way in life, but he was always just a phone call away.”

“He’s been a constant in my life.” Adam knows that Dave’s guidance, friendship and love was beyond measure. “Growing up, I did what was right simply to survive,” said Adam. “Now I do the right things and own my own actions for me, and for the people who believe in me and expect me to live up to my potential. The person I am today was not only shaped by my mother, but by Dave. If my life comes close to the life Dave is living, then I will have fulfilled my mother’s wishes and become truly successful.”